If you’re sick like just sniffly, well, the only reason why we care is that we don’t want to be around you. If you constantly verbalize your cold, flu, or allergies it’s really mundane and boring. Americans have some form of healthcare now! At this point in our current international climate, your little cold or allergies are whiny 1st world bullshit. No one truly gives a rats ass. And if they (the sick people enablers) cater and constantly kowtow to that shit, the little sickies are gonna’ leech on to that codependency and ride it into their golden years. I’ve seen it!

Anyway, so I deliver to a guy who orders quite frequently. This guy always has some story about his health. Mr. Harmon in 511. He has a different boy toy in the room every time I deliver an order. Most of them look like Santa Monica street hustlers. With their little backpacks and plastic bags of clothes and shit sitting on the couch.

Tonight’s delivery interaction;
I knock on the door. It opens, its dark, and smells like cheap stripper strawberry incense or oil.
‘How you doing Mr. Harmon?’
He’s about 6’2″ and really pale and bloated. He looks like Larry Bird’s estranged brother. And has an eerie fucking vibe to boot.
He throws his hands in the air theatrically.
‘Oh God, no Bueno! I think I caught a bad cold, Ramon is going to get me Theraflu.’ Ramon is grabbing his jacket and rushing out into the cold night.
‘I’m sure the concierge has it.’ I say.
‘No, Ramon loves to walk the streets. He’s been doing that for years.’ He turns on the light, I wish he hadn’t.

‘Listen I have this weird thing with my eyes, they keep going back-and-forth.’ He’s pointing at his eyes. ‘Have you ever had that?’ He’s moving his index finger back-and-forth between both eyes. I’m standing there watching this charade. Why oh why the fuck do I have to get a play-by-play of your present status Harmon? ‘We’ll have you?’ He asks again. ‘No Mr. Harmon. I’ve never had that.’
‘Hmm, yeah it’s a pretty unique thing. Well, the doctor gave me some promethazine, but I already took four Norco so I might not be good to mix them.’ Those were drugs that I used to use quite frequently, sick or not. ‘What would you do?’
Harmon asks. At this point, I’m in total ‘who gives a fuck’ mode. So I’m like, ‘Yeah go ahead and guzzle down the promethazine. You’ll get real drowsy and nod off, and then maybe your eyeballs will stop moving back-and-forth.’ He runs into the other room, ‘Hold on hold on,’ he says. Oh no, I just want to get the fuck out of here.

‘Mr. Harmon can you please sign the check?’
He comes running back with two small packages. ‘My housekeeper gave me these the other day. She gets them from some little bodega botanica place in East Los Angeles. They’re Mexican bath salts. Maybe these will help me.’
It’s probably not a good idea to drink the promethazine and then take the bath, right?’
‘Well unless never want to wake up.’ Which sounds like a great idea for either one of us at this point. ‘Ha ha ha. That’s funny.’ He signs and hands me back the bill. Well ‘pray for me by name!’ He says in a show tune like voice. I finally leave. I look in the checkbook, no tip. I feel like my spirit has been run over by a Stolen Cadillac Escalade.

Same night, two hours later. Simple order.
I’m delivering chamomile tea to a Mrs. Gordon, room 319. I’m taxed and tired.
I just want it to be over. Let this night be done. I knock.
‘Room service.’ No answer I lean in, I hear somebody scurrying around. I knock again. No answer, again I hear scurrying around. I knock louder. Still nothing.
‘ROOM SERVICE.’ Nothing. Jesus what the fuck. I kick the bottom of the door three times. ‘ROOM SERVICE!!’
‘Oh ok. Of course.’ I hear a droll voice say.

A frumpy depressed looking blonde 20 something opens the door. My intuition tells me another mundane, soul-sucking situation lies in my wake.
‘Just put the tray on the bed. Listen, I’m concerned. My sliding glass patio door won’t lock properly. Maybe you can take a look.’ I hand her the bill. She puts it down without signing it. That’s always a bad sign. I walk over to the door. It latches. No fuss no muss.
‘It’s fine ma’am.’ I walk towards the bill.

She looks over at the checkbook. ‘I finished a production job early, and I’m here for a couple of days. I’m so bored. What should I do? Don’t say the movies, Universal Studios or Disneyland. Those are stupid suggestions. I already got mad at the bellman for suggesting all that garbage.’ Her voice is high pitched like lee press on nails on a chalkboard, or metal patio furniture being pulled across concrete. I offer up museums, and exhibits, coffee houses, and quaint little hipster neighborhoods.

‘Boring. Boring.’ She says. ‘I need some action!’
‘Maybe go pick up an LA Weekly. You’ll find the back pages loaded with all kinds of activity.’
Her eyes lit up. ‘What are you talking about? Sex, S and M, sex clubs, prostitutes?’
That’s not what I’m talking about. God.’
I looked over at the bill, and made my way to the door. She signs it and is shaking her head.
‘I was talking about music venues, nightclubs, dance clubs. But hey, whatever.’ She growls at me and hands me the bill. I walk out. I’m done for the night. I’d rather fill catsup bottles or do some other form of side work then deal with these people. Just for tonight, I need to get my mojo back.

A 2 pager I constructed from an MSDS (Material Safety Data Sheet) and pure boredom at Color By De Luxe film Laboratory in 1997. 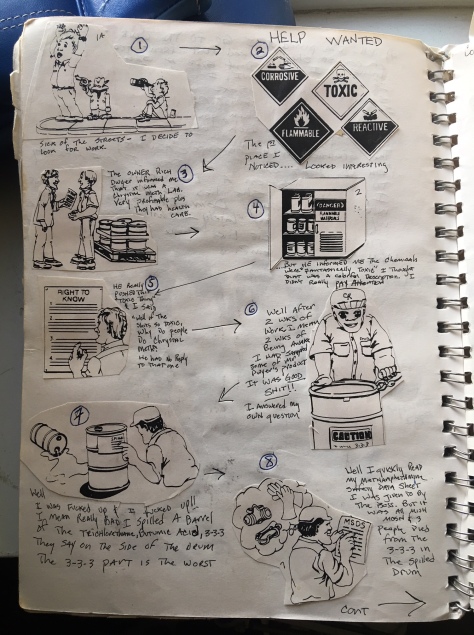 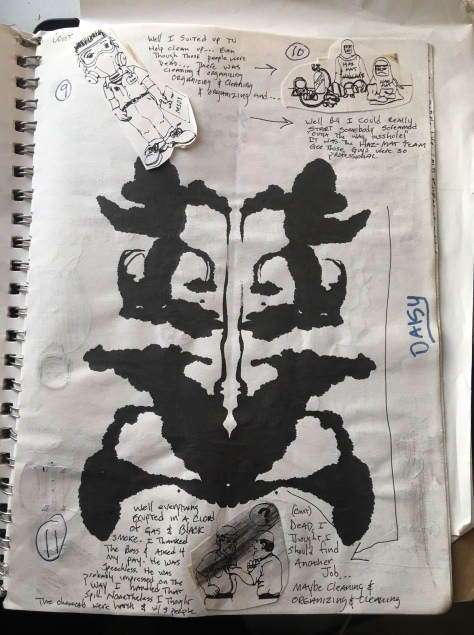 Against my better judgment, I picked up the phone. It was a blocked call.
‘Yes, hello?’

‘I wrote a piece of fiction dude.’ It was Martin, his voice sounded flat, monotone. I didn’t respond. I didn’t know what to say. There was a pause.

‘I wrote a piece of fiction dude,’ Martin said it again in the same banausic tone. Still, I had no idea what to say. Again a pause.

‘Hello? You there man?’ A light wind through the screen door blew a couple of fur balls across the Pergo flooring.

‘Yeah man, I’m here.’ The furballs tumbled and settled by the dog’s water bowl. Maybe I should buy a broom?

‘I wrote a piece of fiction dude?” Now his statement was in the form of a question.

I realized that buying a broom would be the obvious choice. But I had a vacuum. It was an old Hoover upright.

It developed a bushing or gear problem though; as a result, it made a sound that I imagined a blender on high-speed that was filled with hex nuts might produce. It had no suction problems though. It worked just as well as the day I rolled it off the ‘Sears Home’ showroom floor. I wore ear protection and even put the dog outside when I used it, because he literally tried to cover his ears with his paws and forearms, or forelegs as it were. It was a lot of pre-production to vacuum. It had been a while since I geared up to do it, and as a result the fur balls tumbled to and fro depending on the direction cross breeze. I’ll get to it. It might be a while, I was single, and it didn’t bother me. The dishes, the laundry, and the dog shit piled up. It didn’t matter.

“Hear what?’ Occasionally my mother visits and she will clean and do laundry and even pick up the dog shit. But I realized I felt no different either way.

“I wrote a piece of fiction dude,” now his voice sounded stressed and desperate.

“Sure man, read it.” I pondered the whole bachelor thing. Fuck it. I tried. I guess I’m not a relationship person.

“Chapter One, the deputy loaded his gun, it was going to be a hot sweltering summer day of crime on the streets of Chicago…”

My mother and father weren’t relationship people either, 11 marriages and or partners between them. Subsequently they gave birth to the same, it doesn’t take Dr. Phil to figure that out, so no mystery there. He continued,

“…Smithers was a veteran of the Chi Town P.D. He had 40 days and a wake up to a beautiful retirement in Tempe Arizona…”

Maybe just a select few can actually really pull of the relationship game. I mean really pull it off, you know?

I mean like love cherish respect, death do us part, type of deal.

“…his wife had begged for the house in Tempe for health reasons, but Smithers had an autistic brother…how do you like my piece of fiction dude?” I didn’t answer, Martin continued reading.

Getting Through It All